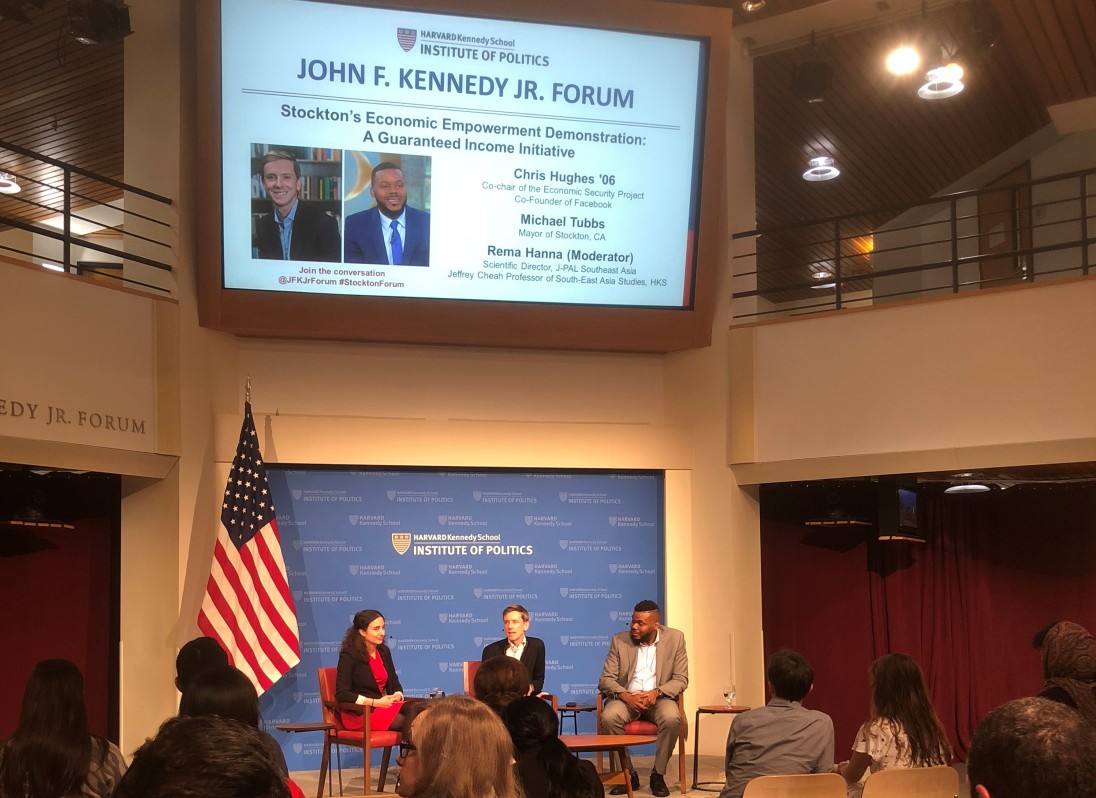 Earlier this week, Chris Hughes (Co-Founder of Facebook and Co-Chair of the Economic Security Project) and Michael Tubbs (28-year old phenom Mayor of Stockton, California) spoke at the Harvard Kennedy School about their upcoming joint experiment with guaranteed income. The Stockton Economic Empowerment Demonstration (SEED) is the first-ever public-private initiative of its kind, where beginning in 2019, 100 Stocktonians will receive an unconditional guaranteed income of $500 per month for 18 months.

Why is this important?

To first establish why this topic is relevant to this blog (focused on workforce automation and the implications for the education sector) — it’s important to understand Hughes’ rationale for why we as society need to explore guaranteed income. And that is — there is a fundamental unfairness and brokenness that underlies the economy:

Clearly these are all massively generalized statements, but the reality is that income inequality is only accelerating, and millions of Americans find themselves unable to pay for their basic costs of living with income from their job alone. Therefore, we as a society must grapple with how we support individuals who are unable to support themselves and their families alone.

Thus, the connection to this blog is simple — the risk that this issue becomes extreme enough to require solutions such as guaranteed income is exponentially increased with the onset of workforce automation. As artificial intelligence and automation displace individuals in the workforce (even if temporarily), levers like guaranteed income will be an indisputable part of the conversation of how to best support those workers as they try to re-enter the workforce, likely directly accompanied by further education to up-skill them for the jobs of tomorrow. It also offers a potential opportunity to compensate individuals who are working, but not in ways that add enough financial value in the economy to be self-sustaining (e.g., caregiving, which is often cited as a “uniquely human” skill that cannot be displaced by automation).

One differentiation Hughes made clear at the event was the distinction between guaranteed income and universal basic income (UBI). While UBI is a popular term thrown around to imply that every citizen within a population (whether citywide or nationwide) receives some recurring monetary stipend, guaranteed income merely implies a recurring monetary stipend for a subset of the population, such that there is effectively an “income floor” that allows every individual to be able to afford basic living costs.

While there is some debate as to whether direct cash payments to be individuals would be the most effective instrument, the arguments for it include (a) from a moral perspective, Hughes argued that allowing people to decide how to allocate their cash themselves is the right thing to do, and (b) Hughes also cited that empirical evidence suggests that this allocation ends up being more efficient.

The Stockton Economic Empowerment Demonstration is likely the first of many experiments into possible arrangements involving direct cash that (among other situations) can help workers who are displaced by automation. By no means is the format that Hughes and Mayor Tubbs created necessarily the most optimal, but it is likely a solution which we will only find find the optimal through many iterations. Fundamentally, we must experiment to identify:

Numerous other outstanding questions also remain that would have to be answered before implementing a large-scale guaranteed income program, including the ability for such a program to sustain itself at scale and whether or not the general public would rally behind such a program. Despite those hurdles, there is significant enough potential for us to consider it within the realm of levers at our disposal as society faces the onset of automation.

View all posts by Taylor Stockton